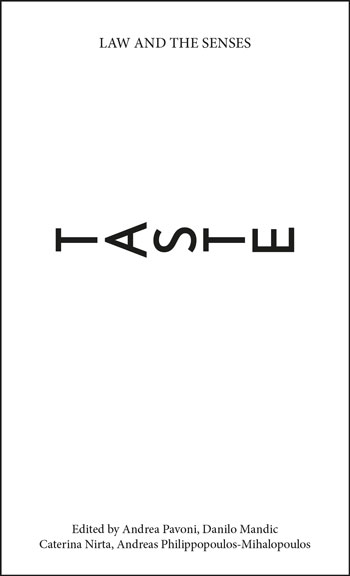 At a time of copious (academic) interest in the post-human capacities of bodies, this series calls for a radical reconsideration of the polarised narrative of the law as widely understood in socio-political discourse. This can only happen through eradicating the sensorial from the phenomenological and overcoming the separation between law and the senses. Usually occupying the bottom of the sensorial hierarchy, on the one hand taste may be understood as the quintessentially hedonistic sense, too close to the animal, the elemental and the corporeal, and for this reason disciplined and moralised. On the other hand, taste is indissolubly tied to knowledge: to taste is to discriminate, to emit judgement, to enter the domain of normativity, and a rather unstable one at that: to taste is to test, to try and to guess, wandering into an uncertain zone of synesthetic immersion where the certainty of metaphysical categories begins to crumble. This introduction pushes the sense of taste beyond the subjective, phenomenological and human dimensions, showing its potential as a tool with which to investigate the materiality of law’s relation to the world. In the concluding section, the six chapters and seven speculative recipes that compose this volume are introduced in depth.

This book has not undergone external peer review. See our Peer Review Policies for more information.