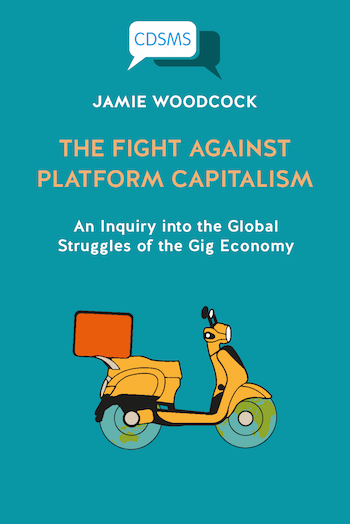 The Fight Against Platform Capitalism

An Inquiry into the Global Struggles of the Gig Economy

Part of the Critical, Digital and Social Media Studies series.

So far, platform work has been an important laboratory for capital. Management techniques, like the use of algorithms, are being tested with a view to exporting across the global economy and it is argued that automation is undermining workers’ agency. Although the contractual trick of self-employment has allowed platforms to grow quickly and keep their costs down, yet it has also been the case also that workers have also found they can strike without following the existing regulations.

This book develops a critique of platforms and platform capitalism from the perspective of workers and contributes to the ongoing debates about the future of work and worker organising. It presents an alternative portrait returning to a focus on workers’ experience, focusing on solidarity, drawing out a global picture of new forms of agency. In particular, the book focuses on three dynamics that are driving struggles in the platform economy: the increasing connections between workers who are no longer isolated; the lack of communication and negotiation from platforms, leading to escalating worker action around shared issues; and the internationalisation of platforms, which has laid the basis for new transnational solidarity.

Focusing on transport and courier workers, online workers and freelancers author Jamie Woodcock concludes by considering how workers build power in different situations. Rather than undermining worker agency, platforms have instead provided the technical basis for the emergence of new global struggles against capitalism.

These are words or phrases in the text that have been automatically identified by the Named Entity Recognition and Disambiguation service, which provides Wikipedia (

) links for these entities.

How to cite this book

Woodcock, J. 2021. The Fight Against Platform Capitalism: An Inquiry into the Global Struggles of the Gig Economy. London: University of Westminster Press. DOI: https://doi.org/10.16997/book51

This book is distributed under the terms of the Creative Commons Attribution + Noncommercial + NoDerivatives 4.0 license. Copyright is retained by the author(s)